Many heat treatment processes – including bright annealing, sintering, and carbonitriding – require a highly controlled atmosphere in order for the process to be successful. These processes are often used to manufacture mission-critical parts for industries such as aerospace, automotive, or petrochemical. The furnaces used in these processes must support a controlled atmosphere in order to achieve successful, high precision, repeatable results for these parts. These atmospheres may include inert gases such as nitrogen, helium, or argon; endothermic mixtures; or hydrogen. The focus of this article will be on inert atmospheres and hydrogen atmospheres, including the types of heat treatment processes they support.

Why Furnace Atmosphere Is Important

The atmosphere in a heat treatment process can be a critical factor: it may act as a carrier for key elements in the process, or it may act to protect the part being heat treated from the effects of exposure to air while also exposed to substantially elevated temperatures. As a carrier, the atmosphere is chemically reactive with the surface and leads to improved surface characteristics to support processes such as hardening. As a protective atmosphere, its task is the opposite: it protects the surface of the part from chemically reacting with potentially harmful elements in the atmosphere.

Depending on the heat treatment process being performed, the lack of a controlled protective atmosphere could lead to chemical reactions on the surface of a part that would compromise its quality and performance, leading to rejected parts. That, in turn, leads to financial loss, wasted time, and potentially dangerous repercussions for those using the part if its issues were not detected. In addition, an improperly controlled atmosphere could lead to a damaged furnace or, worse yet, injured employees. 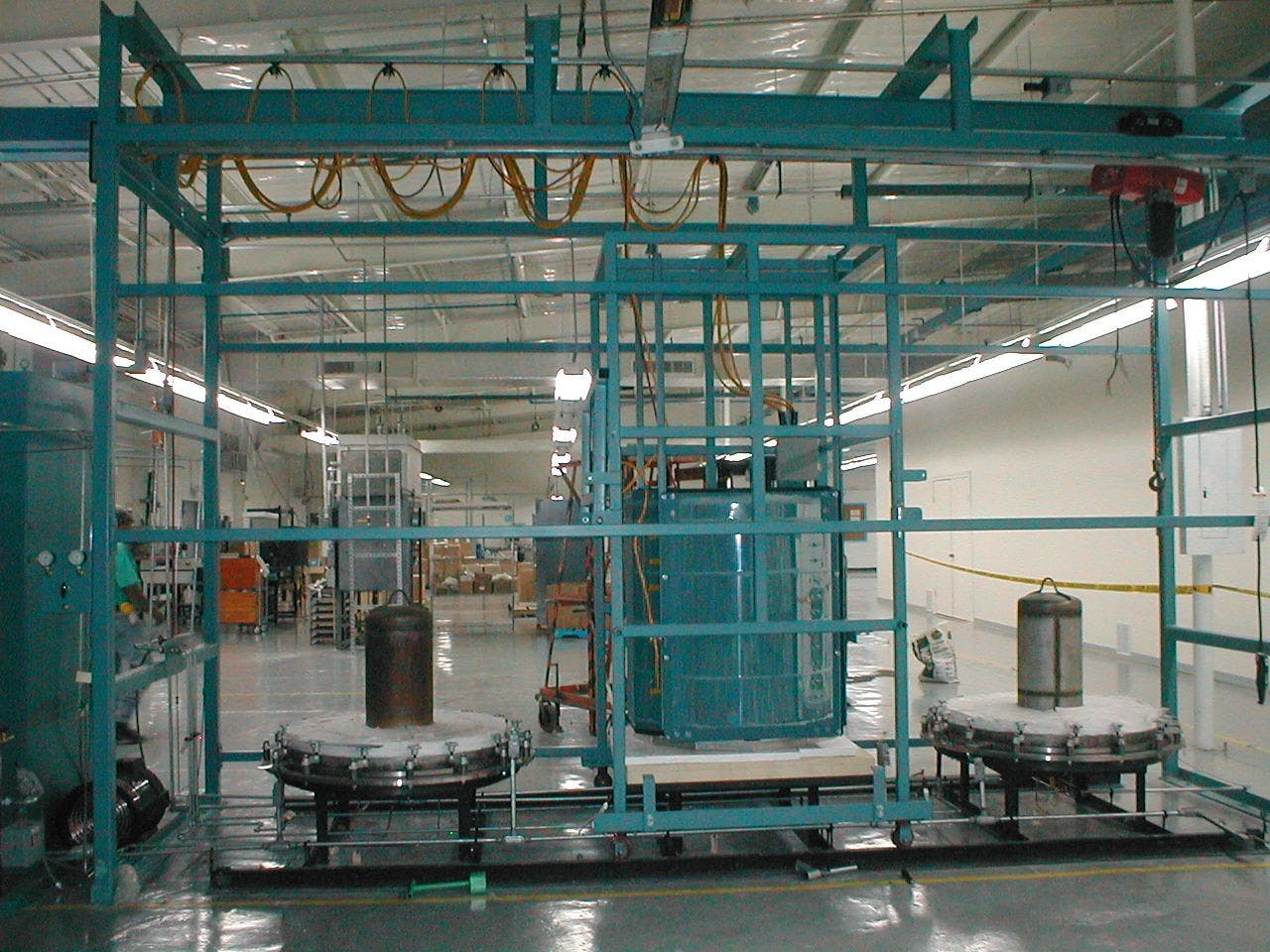 There are several gases commonly used in heat treatment furnaces in addition to air, and these often include hydrogen, nitrogen, oxygen, helium, argon, carbon monoxide, carbon dioxide, ammonia, propane, methane, and butane. Of these, oxygen is the most reactive – as an atmosphere, air behaves like oxygen – and results in serious issues like oxidation and decarburization which can compromise the quality and performance of a part. In this article, we will be focusing on inert gases (helium, argon, and nitrogen) as well as hydrogen.

There are several different heat treatment processes that may require a controlled atmosphere in order to be successful. Those requiring either an inert atmosphere or a hydrogen atmosphere include the following:

These processes can involve a variety of metals and be used to prepare parts for many different industries, including aviation, tooling, healthcare, energy, automotive, military, oil and gas, electronics, and the semiconductor industry.

The Need for Inert Atmospheres 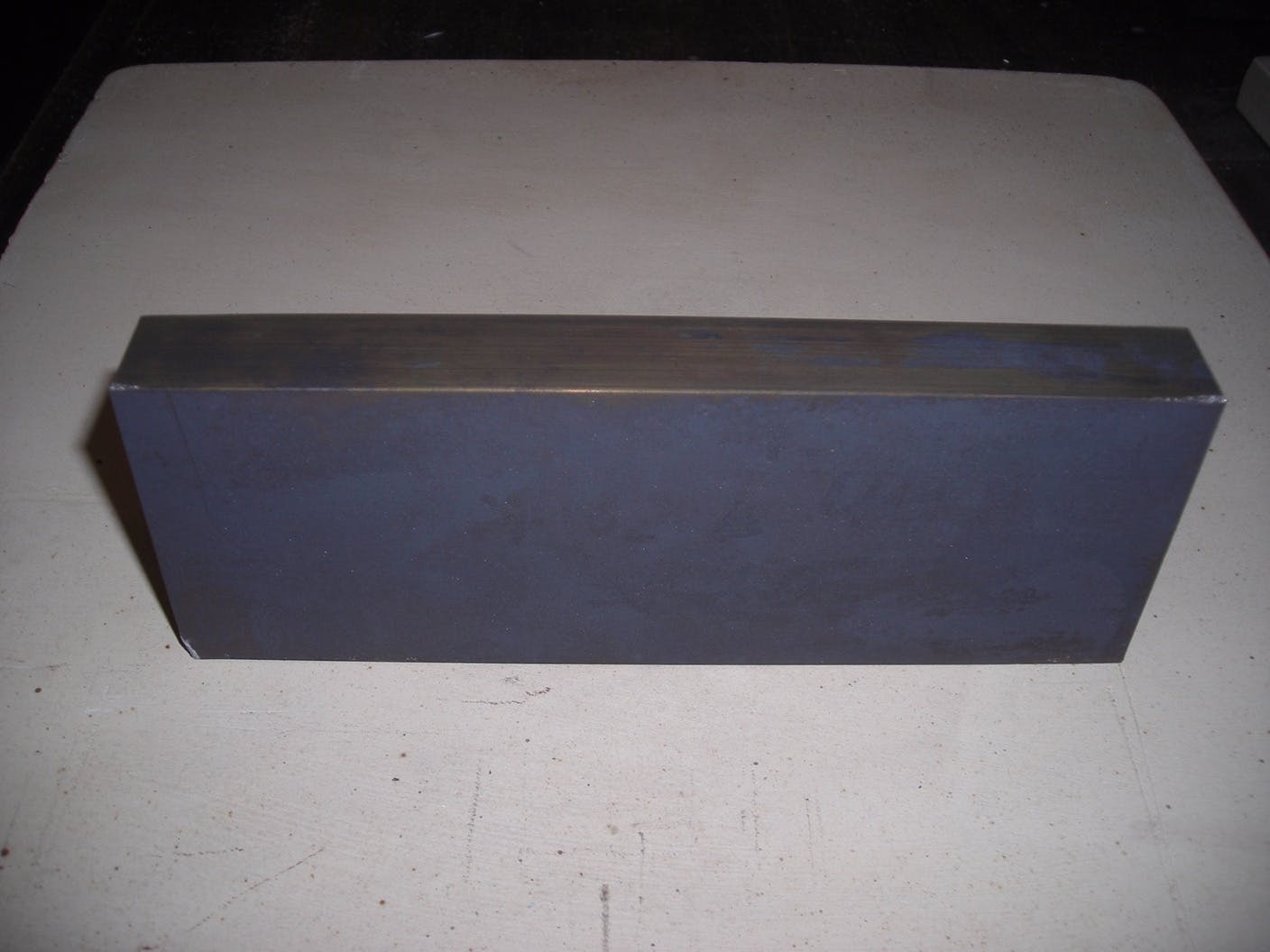 An inert atmosphere, sometimes referred to as a protective atmosphere, produces very clean parts in a highly controlled environment. It also serves to prevent unwanted chemical reactions (like oxidation or decarburization) from occurring on the surface of the part.

Inert atmospheres are often used in connection with processes such as hot isostatic pressing (HIP), sintering, and vacuum operations. Both HIP and sintering are commonly used with components made from additively manufactured parts, including powdered metal (PM) and 3D printed metal parts.

The Role of Inert Gases in Heat Treating

The inert gases most commonly used in heat treatment processes are argon (Ar), helium (He), and nitrogen (N2), and they are often used in the following combinations: Ar/He, Ar/He/ N2, and N2/He. Many types of non-ferrous metals are heat treated in an inert atmosphere, including copper, brass, and aluminum. The degree to which an atmosphere can be called inert depends on factors such as the type of gas, its level of purity, the temperatures involved, and the material being processed. While nitrogen is non-reactive with most steels, it may react with others above certain temperatures. In general, argon and helium are more inert than hydrogen.

A pure nitrogen atmosphere provides blanketing of the part being heat treated and can be used to purge the existing atmosphere or be used as a carrier gas for carbon-controlled atmospheres. Note that nitrogen is not truly an inert gas. It is usually delivered at dew point between -75°F and –110°F and mixed with hydrogen in a 90/10 blend. A new guideline for the use of hydrogen blended gas to be inert is 3% or less.

An atmosphere of N2 can be used for the following heat treatment processes:

Argon provides an inert atmosphere and is usually delivered at dew point less than -75°F with an oxygen content below 20 ppm. An atmosphere of Ar can be used for the following heat treatment processes:

A He atmosphere is typically used for HIP and vacuum heat treatment processes.

The Role of Hydrogen in Heat Treating

A hydrogen-rich atmosphere is often implemented to reduce iron oxide to iron and decarburize steel. It also effectively aids in heat transfer and can react with any oxygen present. Hydrogen is used in the following heat treatment processes: 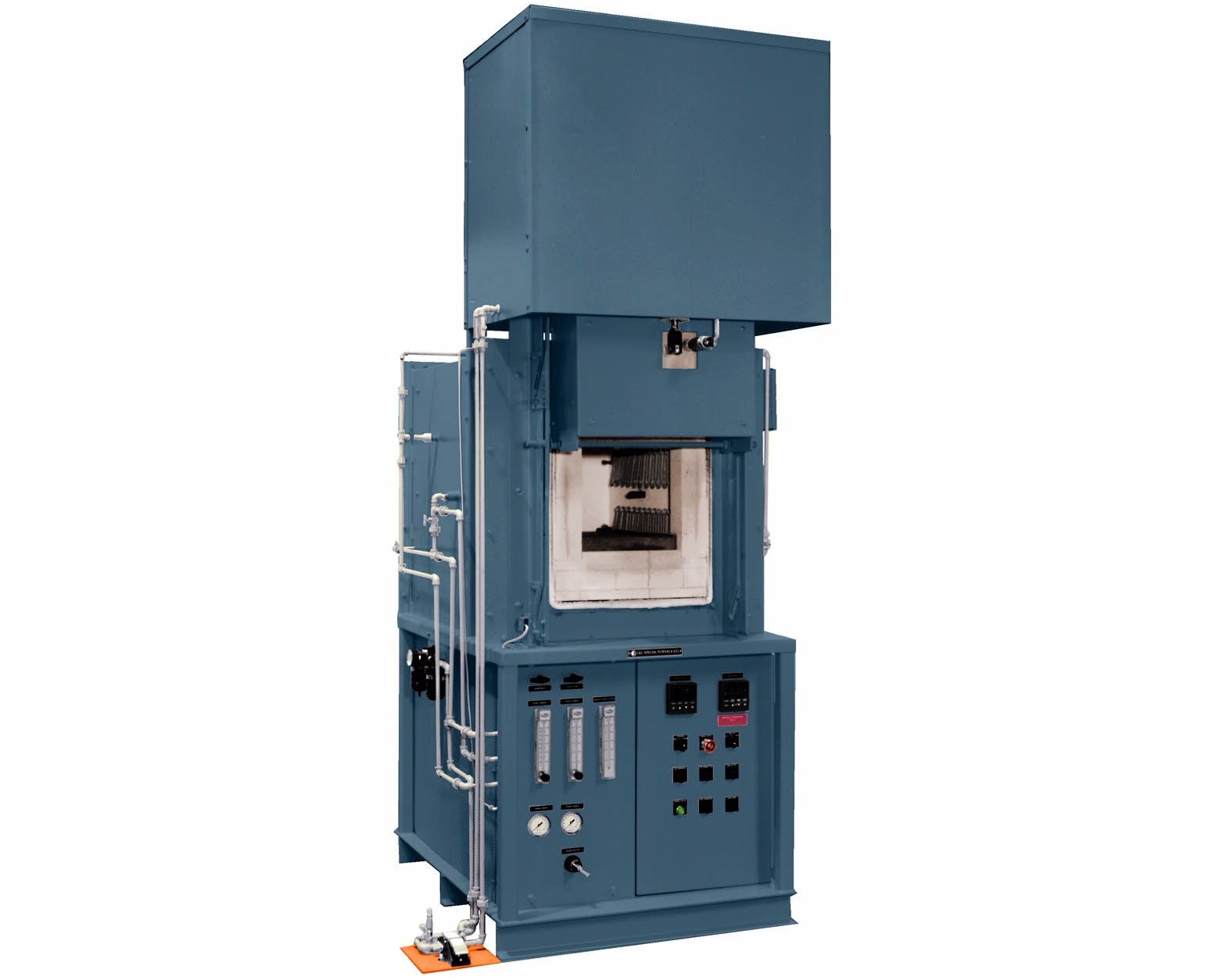 The protective gases used in furnace atmospheres are usually a mixture of hydrogen, nitrogen, carbon dioxide (CO2), carbon monoxide (CO), and trace amounts of water. The necessary gases are either injected directly into the furnace as a nitrogen and methanol (CH4) mixture or via an endothermic generator using propane or natural gas as the source for carbon. An endothermic atmosphere is produced by cracking methane into nitrogen, hydrogen, and carbon monoxide in a retort.

The endothermic gas is produced when a mixture of air and fuel at a very low air-to-gas ratio is introduced into an externally heated retort that itself contains an active catalyst (usually nickel) for cracking the mixture. When this gas leaves the retort, it is rapidly cooled before it arrives in the furnace. The typical composition is 40% H2, 20% CO or CO2, and 40% N2.

There are other classes, but they do not fall within the scope of inert or hydrogen-rich atmospheres.

The challenge in using a protective atmosphere in a heat treatment furnace lies in containing the atmosphere and requires the use of an atmosphere-controlled furnace. Establishing an atmosphere begins with purging the furnace of its existing atmosphere using the desired gas. There are two different types of furnaces that are designed to contain the atmosphere once it has been established: one focuses on sealing the gas in, while the other makes use of a retort.

The sealing approach involves a door seal and welded (or double-welded) case seams. The door seal usually takes the form of brick-to-brick or fiber-to-fiber with a woven gasket comprised of ceramic fiber. In an electric furnace, the element connection areas are sealed and gasketed with silicone rubber, then purged. In a gas fired oven, radiant tubes are able to separate the furnace atmosphere from the products of combustion.

The sealed box approach is quite economical because there is less maintenance required when compared to a retort furnace. In addition, the heating elements can be more evenly distributed and adding a fan is not a major issue. However, this method has limitations when it comes to the dew point that can be achieved, which is usually limited to +20°F. The other drawback is the potential for contamination of the atmosphere as air and moisture may get trapped in the insulation.

The second approach involves an alloy retort (sometimes referred to as a muffle) that is made from a nickel-based alloy. The retort is heated by gas or electric power that is external to the furnace. There are a few different ways of sealing the retort for furnace applications. One consists of a silicone O-ring gasket and clamps that are securely bolted down. The seal itself is outside the furnace chamber. Another approach to retort sealing implements a sand seal contained within a trough that has been welded around the perimeter of the retort, which allows the entire retort to be contained within the furnace chamber. Of the two approaches, the silicone O-ring gasket approach provides the highest level of atmospheric purity.

The retort method results in the cleanest atmosphere and can achieve dewpoints on the order of -40°F. It is, however, more costly, difficult to use a fan with, and requires more maintenance than the sealed box approach.

Sample ports, as the name implies, allow the operator to sample the atmosphere of the furnace for

Sample ports are often a necessary aspect of an atmosphere-controlled furnace, depending on the type of atmosphere and heat treatment involved.

Depending on the atmosphere being used and the type of heat treatment involved, a flame curtain is often a wise option. 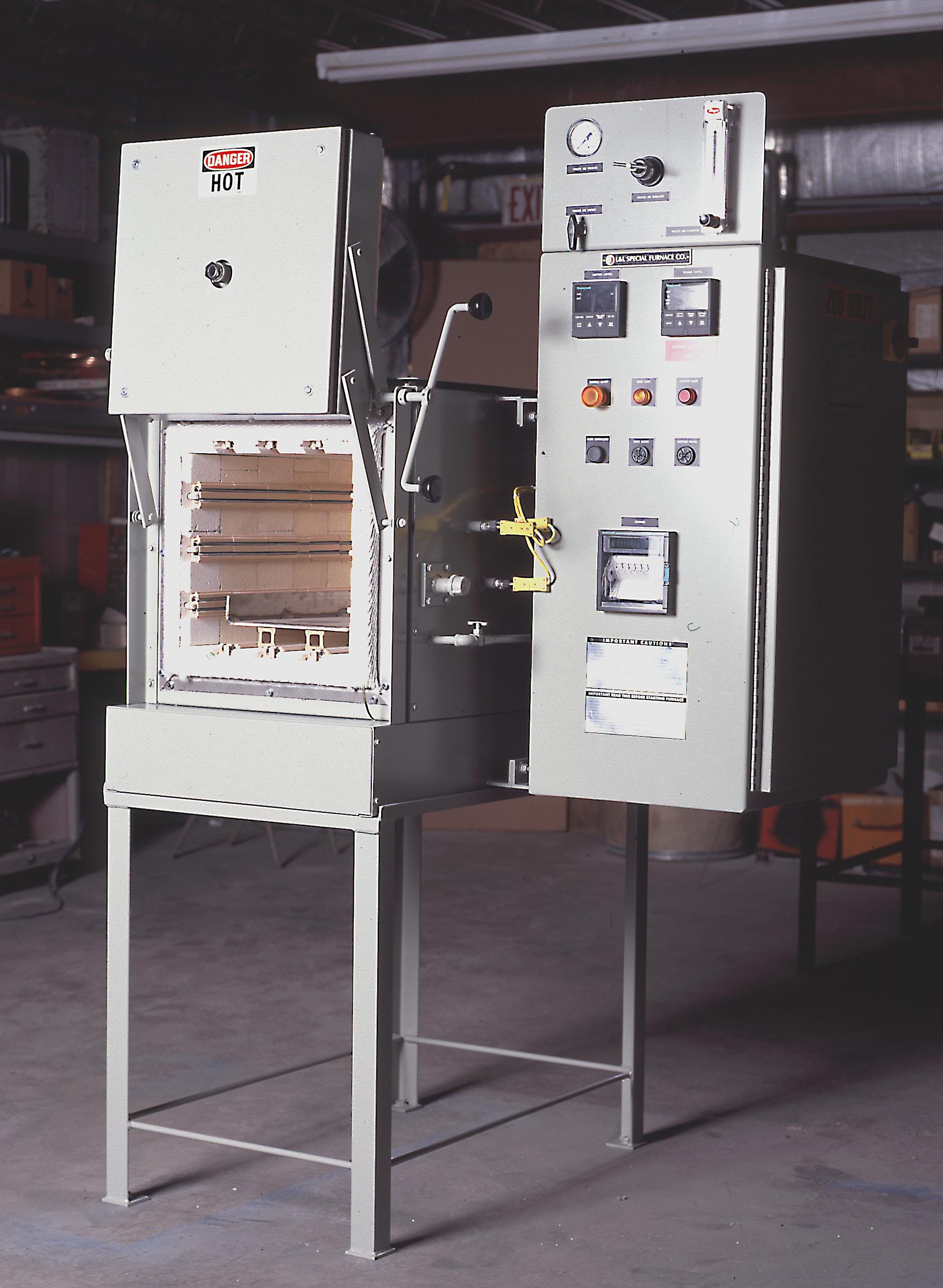 At L&L Special Furnace, we understand how critical control, precision, and repeatability is when it comes to heat treatment processes. That’s why our furnaces are designed with superior workmanship and sophisticated engineering. We also understand that each of our customers has specific needs that are not always addressed by an off-the-shelf solution, so our furnaces come in many different sizes and with a tremendous variety of options that allow us to customize a furnace to your specific needs. In fact, L&L Special Furnace has four different furnace models that support controlled atmospheres.

The XLC series (which is based on the XLE) supports 100% hydrogen or mixtures of hydrogen, carbon monoxide, natural gas, and other combustible atmospheres as well as purely inert atmospheres. The design of this furnace emphasizes operator safety, process quality, and precision process control. The control system, flow system, and alloy retort are integrated together as a single unified system. The retort is typically a 330 alloy, Inconel 600 or Inconel 601, but other alloys may be engineered for special applications. Depending on the purity of the gases used, the XLC can maintain a dew point as low as -60°F. Typical processes that this furnace is well adapted for include stainless steel annealing, hydrogen brazing, and any type of process that cannot tolerate the presence of oxygen, requires a low dew point, or a very high degree of atmospheric reliability and repeatability. Options similar to those for the XLE are available.

The JSC series supports an atmosphere of 100% hydrogen, a mix of hydrogen, inert atmospheres, and combustible atmospheres. This furnace is a shuttle lift furnace with a bell type “top hat” alloy low dew point retort. The control system, flow system, and alloy retort are integrated together as a single unified system. It works extremely well for the same processes listed for the XLC atmospheric retort furnace. 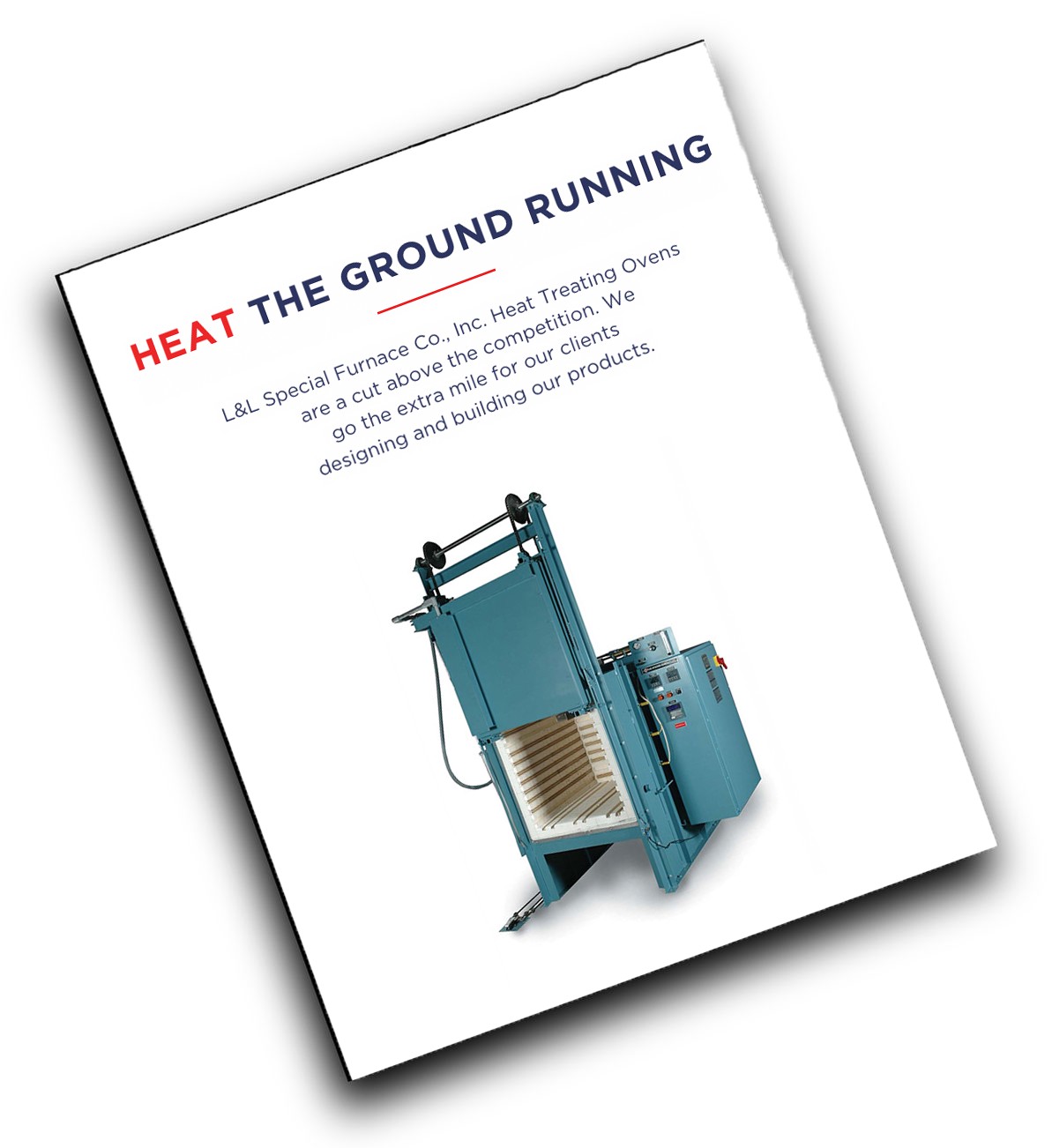 Don’t forget to request your free quote & grab a copy of our white paper!

When it comes to heat treatment furnace atmospheres, we can answer all your questions as well as help you with atmosphere-specific control panels, mass flow meters, dew point control, carbon control, oxygen/hydrogen analyzers, and hydrogen leak monitors. Contact us today to find the heat treatment solutions that you need and the quality customer service and support that you deserve.